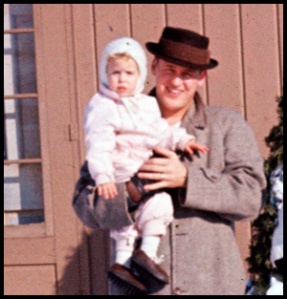 Grandma Trudi grew up on a farm in Elba, Minnesota, the youngest of five children with three brothers and a sister.

She was struck with polio in her early teens — the year would have been about 1924, give or take a year or two.

“Trudis was out in the yard doing chores when she went down,” her childhood friend Dorothy told my sister a couple of years ago.  “She struggled to get up with her crutches as I watched with her Pa and brothers a good distance from where she laid.”

I picture them standing on a big farmhouse front porch.

“We were told not to move to help her.”

Trudis got up.  Without encouragement or applause.  Her Pa yelled from where he was planted, “ok, now finish it.”  Finish your chore.

When I was six, I was struck with what doctors then diagnosed as Juvenile Rheumatoid Arthritis.

I didn’t walk for a good six months.

My dad carried me.

He lifted me, and I could go anywhere.  I wrapped my arms around his neck and felt love, compassion, hope, determination.

He and my mother took the tough route of making sure I would walk again by choosing physical therapy over drugs.  I managed pain with my new best friends the heating pad, the steaming hot bath and the library book.

Dad made a “foot board” for me to push against and flex my swollen ankles.

Somehow he found the strength to endure my tears as he pushed me to keep pushing — not unlike Grandma Trudi’s Pa stood firm, bearing his own pain along with hers and stopping himself from rescuing her so she could learn to depend on herself.

It could be said there is no greater love than what a father will not do.

Even when he does not carry me.

My art flows from the patterns & paths of my lived experience which ⏤ like yours ⏤ are at once deeply personal and entirely universal. View all posts by Julie Ann Stevens

This site uses Akismet to reduce spam. Learn how your comment data is processed.